Director General Johnson Chiang of the Taipei Economic and Cultural Office in Chicago welcomed the signing of a memorandum of understanding (MOU) between Northwestern University (NU) and National Taiwan University (NTU) on May 27 in a virtual signing ceremony which was held simultaneously in Taiwan and in Chicago. This is the first MOU signed between a university in Taiwan and one in the United States since the Taiwan–U.S. Education Initiative was launched in December, 2020.

The ceremony was co-hosted by Devora Grynspan–Vice President for International Relations at NU, and Yuan Hsiao-Wei–Vice President for International Affairs at NTU. Dr. Morton Schapiro–the president of NU, Dr. Kuan Chung-Ming–the president of NTU, and Chicago Deputy Mayor Samir Mayekar were among the dignitaries who attended and extended their congratulations.

The project, starting this year, will include the establishment of language partners and mutual visits by students from the two universities, short-term study exchanges, NTU sending outstanding Chinese teachers to NU, and science, technology and medical field exchanges and cooperation between the two universities.

The two-way exchanges between teachers and students of the universities will bring mutual benefits and demonstrate the spirit of equitable mutual exchange. Participation in project activities and exchanges will enhance the language acquisition of students from both universities, and this cooperation platform will optimize students’ international competitiveness in scientific and technological matters.

Mr. Chiang said that Taiwan is happy to support the project, and he thanked the Friends of Taiwan Foundation for its generous donation and support of the exchange and study program that will promote mutual student understanding and the friendship between National Taiwan University and Northwestern University. 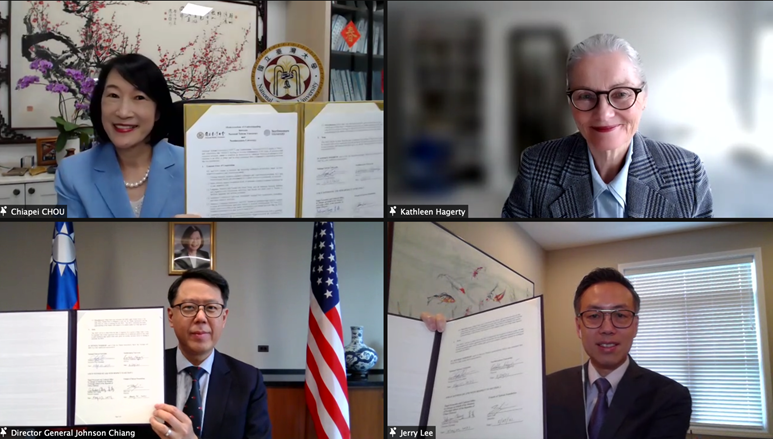