The Vienna Center for Taiwan Studies was formally established in the Department of East Asian Studies/Sinology at the University of Vienna in December 2009, and it has received funding support from Taiwan’s Ministry of Education since 2012. The Vienna Center for Taiwan Studies regularly organizes lectures and events to give more people in Austria a chance to get to know Taiwan better, and it’s continued doing so despite the challenges caused by the current pandemic and the related restrictions.

The Vienna Center for Taiwan Studies organized a film screening of taipeilove*, a contemporary documentary depicting the historical fight for marriage equality in Taiwan. Due to the current pandemic situation in Vienna and related prevention measures, only about 50 people were able to attend the film screening on 29 May, 2021 and all the available seats at the Admiral Cinema in Burggasse in Vienna were filled.

Dr. Astrid Lipinsky of the Vienna Center for Taiwan Studies began by thanking all the sponsors of the screening and the supporters of the center including the Ministry of Education, and Dr. Elisa Hsiang-Yueh Wang, the Director of the Education Division. She then asked Katharine Chang, Head of Mission of the Republic of China (Taiwan) to make some remarks. Katherine was delighted to welcome everyone and she talked about the same-sex marriage law in Taiwan. Taiwan has organized the largest gay pride marches in the region since 2003, so it was considered only a matter of time until the law caught up with reality. Just before the government bill was voted on in 2019, President Tsai expressed her hope that Taiwan could make history by showing that progressive values can take root in an East Asian society and that love wins. And Taiwan did just that. Since then, more than 5,000 same-sex couples in Taiwan have married. Love has prevailed and Taiwan is the first country in Asia to achieve marriage equality.

This documentary film gave the audience an insight into and appreciation of the diverse and vibrant society in Taiwan, including the debate and discussions among different interest groups, and the reality of life for same-sex couples in Taiwan before the same-sex marriage law was passed. The audience was able to see Taiwan’s vigorous democratic processes in action and then enjoy a lively informative discussion with its director, Lucie Liu, after the screening. 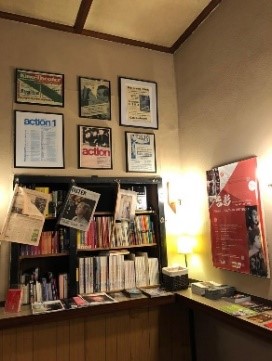 A corner of the Admiral Cinema
Top