The Distinguished Taiwan Alumni Awards, inaugurated in 2018, are conferred once every two years to recognize the outstanding achievements in the fields of education, industry, and/or civil service of people who have studied in Taiwan.

The Ministry of Education announced the five people selected to receive one of the most recent Distinguished Taiwan Alumni Awards on April 17, 2021. Among them was Dr. Françoise Mengin, the director of CERI (Centre de recherches internationales).

In 1986, Dr. Mengin received a Chinese language scholarship from Taiwan’s Ministry of Education, and she studied Mandarin for two years at the Mandarin Training Center of National Taiwan Normal University. She has been one of the pioneers in the Taiwan Studies field in France. In 1994, she was the first student at Sciences Po Paris to choose Taiwanese politics as the subject of her dissertation. In 1997, Dr. Mengin joined CERI, a renowned research center in Europe, where she dedicated herself to education, research, and publishing her findings, thereby helping to nurture a new generation of scholars in the field of Taiwan Studies. Her long-term efforts to promote Taiwan Studies have had a positive effect on exchanges between Taiwan and France—and this led to her winning of the 10th French–Taiwanese Cultural Foundation Award in 2005. This is an award jointly established by Taiwan’s Ministry of Culture, and the Academy of Moral and Political Sciences in France.

In her acceptance speech, Dr. Mengin recalled some of her unforgettable experiences as a student in Taiwan from 1986 to 1988. She witnessed the lifting of martial law in 1987, an important step forward towards Taiwan’s democratization. She also said that receiving a scholarship from the Taiwanese government to study in Taiwan was an extraordinary opportunity that changed her life. As a former scholarship holder and a winner of the Distinguished Taiwan Alumni Award, she said, “Taiwan is the only place that I know of that could have offered me these such gratifying awards.”

Representative Wu thanked Dr. Mengin for having devoted more than twenty years to Taiwan Studies and becoming an important figure in the field of Taiwan Studies in France. He expressed his hope that the new generation of French scholars will follow her example and ensure that academic circles around the world will be more aware of Taiwan’s political development. 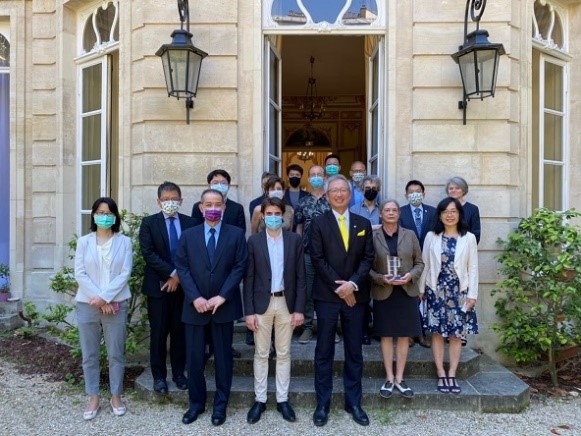 The participants in the ceremony
Top