font-size：
Representative Hsiao Bi-khim (left), head of TECRO in the US, and Johnson Chiang, the Director General of TECO in Chicago, at the joint MOU signing ceremony

These university-to-university collaborations are being sponsored by the Ministry of Foreign Affairs and the Ministry of Education to implement Taiwan Excellent Mandarin program. The program activities will include the selection of Mandarin language teachers from Taiwan to teach in the United States, awards for American students to study in Taiwan and assist in Taiwan’s bilingual education activities, as well as the establishment of a Mandarin language teaching centers.

Representative Hsiao Bi-khim, head of the Taipei Economic and Cultural Representative Office in the United States, Johnson Sen Chiang, the Director General of the Taipei Economic and Cultural Office (TECO) in Chicago, and John Lin, the Director of the Education Division of TECO in Chicago joined university presidents and provosts from the University of Illinois System, the University of Michigan, Southern Illinois University System, and North Park University attended the ceremony in person. Twelve other academic leaders from Oakland University and Indiana University and more than 30 administrative leaders from the six signatory universities in Taiwan attended virtually. More than 60 people in Taiwan and the US taking part in this important ceremony.

The representatives of the signatory US universities thanked the Ministry of Foreign Affairs and the Ministry of Education for supporting and promoting such cooperation opportunities. They each introduced their Taiwan Excellent Mandarin team members and commented that educational cooperation between Taiwan and the US stems from the strong and lasting friendship between their people.

Representative Hsiao congratulated the participating universities on their several months of effort leading up to the signing ceremony and the potential results to be achieved through public-private collaboration. Taiwan’s overseas education agencies and units will continue to promote Mandarin language teaching in the US, and look forward to more in-depth language education cooperation between Taiwan and the US. 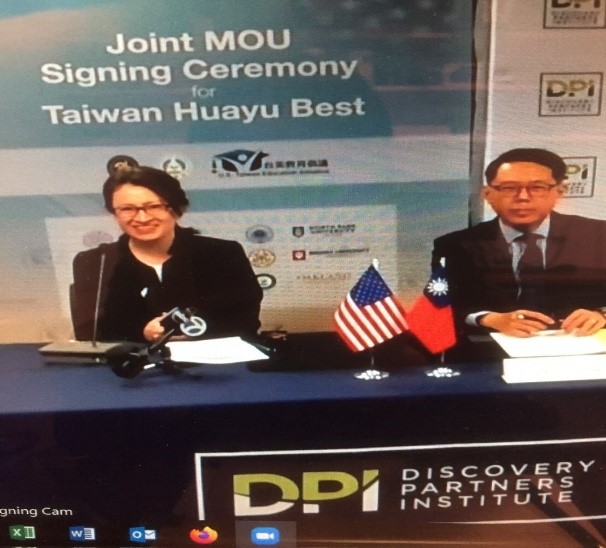 Representative Hsiao Bi-khim (left), head of TECRO in the US, and Johnson Chiang, the Director General of TECO in Chicago, at the joint MOU signing ceremony
Top