font-size：
The poster of Europe-Asia Forum

The main institutions of the European Union are mostly located in Belgium, together with a large pool of highly talented international experts, so Belgium’s major institutions of higher education are well-positioned for teaching and research in EU related fields. With the assistance of the Education Division of the Taipei Representative Office in the EU and Belgium, the Institute of International Relations at National Chengchi University (NCCU) in Taiwan and the Faculty of Economic, Social and Political Sciences and Communication at the Catholic University of Louvain (UC Louvain) jointly organized a Europe–Asia Forum. Leading scholars and experts from Taiwan and Europe were invited to discuss a variety of topics over three sessions, held on October 1, October 8, and October 15.

The October 1 session—on Drivers of Eurasian Regional Integration—began with a presentation by UC Louvain Professor Edoardo Traversa on the important historical objectives and implications of the EU integration process, and the important role of the EU’s economic pluralism and legislation in boosting integration, despite recent challenges.

Professor Su Hung-Dah, Dean of the College of Social Sciences at National Taiwan University, and Director of the European Union Center in Taiwan, then discussed geopolitics, comparing similar features of the geographical positions of Europe and Asia to deepen the audience’s understanding of Asian geopolitics. He also gave an analysis of the involvement of the US in the affairs of Asia Pacific and Indo Pacific regions in recent years and the nature of changes in its ideology regarding Asia.

The October 8 session—on Economic Integration and Foreign Trade Policies in Europe and Asia—began with a presentation by Professor Jean-Christophe Defraigne at UC Louvain, on Europe’s role as a buffer between two superpowers, the US and Russia, and the important role that economic and trade policies play in close cooperation between countries. Dr. Roy Lee, Senior Deputy Executive Director of the Taiwan WTO and RTA Center at the Chung-Hua Institution for Economic Research, then outlined the objectives and focus of trade policies in different period from Taiwan’s perspective. He also touched on a key topic—Global Supply Networks—to incisively discuss the evolution and development of Taiwan’s industry policies and he explained the effects of global supply chains on the formulation of industry policies in the US and the EU.

The October 15 session—on the Geopolitical Dimension of Euro-Asian Relations—began with a presentation by UC Louvain Professor Elena Atanassova-Cornelis. She focused on the Asia-Pacific and Indo-Pacific regions and the geopolitical influence of the strategic rivalry between the US and China, and of other actors in the region. She then described challenges to security in the Indo Pacific region from traditional and non-traditional areas, and finished with an analysis of the EU’s diverse, multilayered approach to regional cooperation and how the EU might engage more with that region, and the potential risks.

Dr. Su Cho-Hsin, Director of the European Union Program at NCCU, followed her and discussed various aspects of the political and economic cooperation between the European Union and East Asia and the related opportunities and challenges. These are of course affected by complex global interdependencies and competition.

The students in Taiwan and Belgium all benefited a great deal from the three sessions and related discussion, and their intellectual engagement with the topics and recognition of the issues involved was clearly evidenced by their enthusiastic participation during each question time.

The poster of Europe-Asia Forum 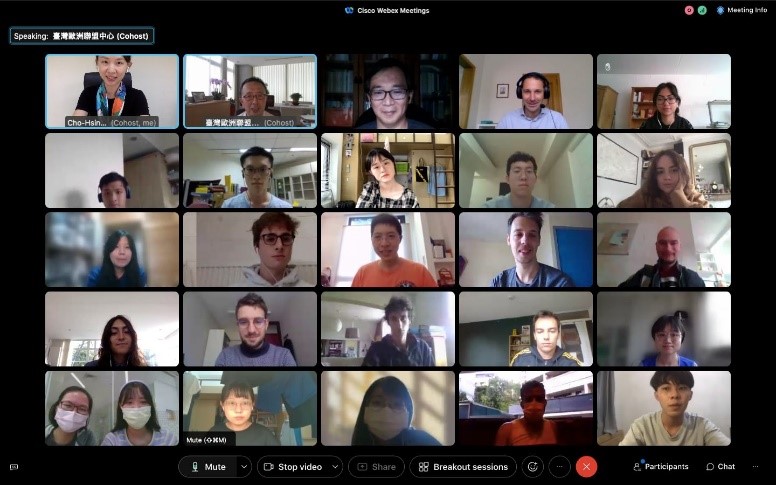 The participants of Europe-Asia Forum
Top