Presidency University Bangalore, located in the city known as India’s Silicon Valley hosted a ceremony for signing of a memorandum of understanding (MOU) to establish a Taiwan Education Centre (TEC) on its campus and a ceremony for the inauguration of the new TEC was held on December 27, 2021. This is the 24th TEC set up in India.

The MOU was signed by Dr. Nissar Ahmed, the Chancellor of Presidency University Bangalore, and Peters LY Chen, Director of the Education Division at the Taipei Economic and Cultural Centre in India (TECC).The ceremony was also attended by Baushuan Ger, Taiwan’s Representative to India. The participating dignitaries were received with a Guard of Honor of National Cadet Corps when they arrived at the Presidency University campus and students performed traditional dances of four Indian states to welcome them.

Director Peters L.Y. Chen said, “We hope that through the TEC, we will be able to make Presidency University a hub for learning the Chinese language in Karnataka. This will increase opportunities for students to work in Taiwanese companies, in India or in Taiwan. Moreover, there are many international software design companies in Bangalore, and this Chinese teaching collaboration will upskill students’ language abilities and this will also lead to increasing their future job opportunities with such companies”.

In addition to the Chinese language courses that the TEC will offer, cooperation between these seven universities and Presidency University will definitely help Indian students to learn more about Taiwan and opportunities to study and do research there. 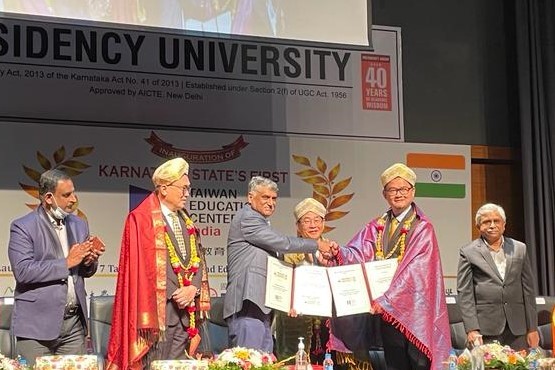