font-size：
Participants in the virtual signing ceremony, with the signed agreements

Over the years, the Ministry of Education has worked with universities ranked in the top 100 in the world to establish scholarships to encourage Taiwanese students to pursue doctorate programs at these prestigious institutions. With the signing of this agreement, the University of Chicago has become the 10th university in the United States, and one of 18 leading universities in the world, with which the Ministry has such a partnership in place.

In her remarks at the signing, Director General Lee said that the Ministry of Education is very happy that the establishment of the Taiwan–UChicago Graduate Fellowship program will enable more outstanding students from Taiwan to join the academic community and pursue their studies at a world-class university. This will broaden their international outlook and further strengthen academic cooperation between Taiwan and the United States. She thanked the people at the University of Chicago and at the Education Division of TECO in Chicago who worked together to set up the Fellowship program.

TECO Director General Johnson Chiang described the University of Chicago as a world-renowned universities, and he is glad to see more Taiwan students pursue their dreams there. He looks forward to seeing the future collaborations between UChicago and Taiwan, which will be enhanced by the newly-established Taiwan–UChicago Graduate Fellowships.
Prof. Ka Yee Lee spoke of the long history that the university has with Taiwan. Dr. Lien Chan, an alumnus of the university, was the first foreign national to be elected to the Board of Trustees of the University of Chicago, at the time when he was premier. He said that the university values this partnership with Taiwan immensely. 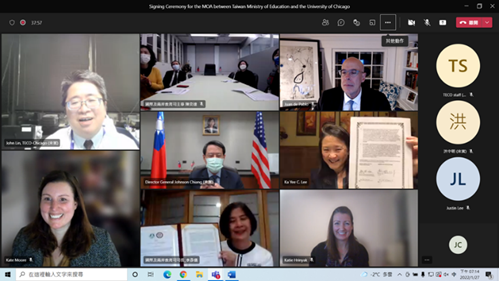 Participants in the virtual signing ceremony, with the signed agreements
Top