International Solidarity between Indigenous Peoples: Sovereignty and Self-determination in the Post-COVID World - Webinar at the University of Ottawa

As part of the 40th anniversary of the Human Rights Research and Education Centre at the University of Ottawa in Canada, Professor Scott Simon, holder of the Chair of Taiwan Studies at the University of Ottawa, collaborated with the Centre to present a webinar on Indigenous Rights with invited scholars from Taiwan and Canada on March 21, the International Day for the Elimination of Racial Discrimination.

More than forty participants from Canada, the United Kingdom, the United States, the United Arab Emirates, India, France and Somaliland took part in the webinar. As well as university-based participants, there were also several people from the Canadian Parliament, the Assembly of First Nations, the government of New Brunswick province from the City of Ottawa government, and NGOs, such as the Asia Pacific Foundation of Canada, the Mennonite Social Welfare Foundation, and Interpares, that work to achieve social justice and development.
The webinar began with an overview of Indigenous sovereignty in Canada, given by Professor Ghislain Otis, the Canada Research Chair on Legal Diversity and Indigenous Peoples, who works in the Faculty of Law at the University of Ottawa. He argues that while international law confers sovereign privileges on states, the law also requires states to “recognize” rather than “grant” the inherent sovereignty of Indigenous peoples. This provides great room for substantive self-determination within established states.

Taiwan-based scholars—Dr. Awi Mona and Professor Jolan Hsieh (Bavaragh Dagalomai), both from National Dong Hwa University, and Dr. Yi-shiuan Yayut Chen and Dr. Wu Chin-Wen, both from National Chengchi University—then each presented their views on a number of topics related to Indigenous sovereignty. There is ongoing and substantive work underway in Taiwan, to recognize Indigenous groups, create legal autonomy for Indigenous people, and address discrimination; although there are also conservative forces at both state and social level. But like Canada and other liberal democracies, Taiwan has embarked on processes of reconciliation and transitional justice and each of the scholars addressed these various aspects.

The presentations were followed by a discussion moderated by Professor Scott Simon, and then a Q&A session, with questions raised by the other participants.
Everyone looks forward to people in Taiwan and Canada being able to jointly organize more substantive projects when international travel resumes after the pandemic. 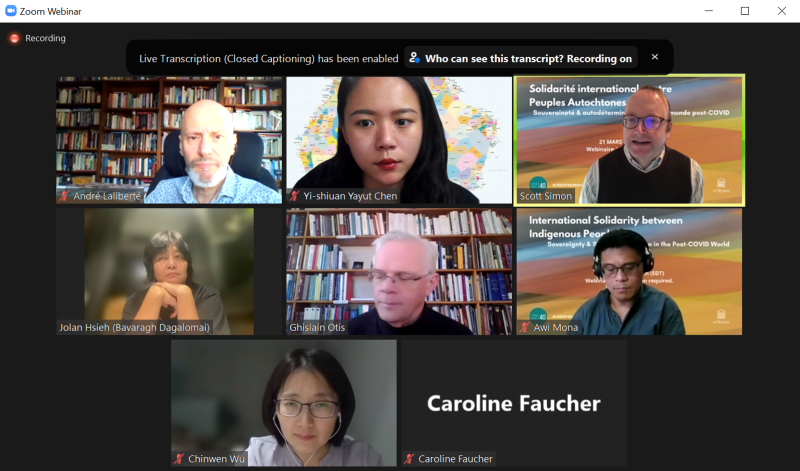