On May 24, 2022, Louis M. Huang, Director General of the Taipei Economic and Cultural Office in Los Angeles (TECO-LA) welcomed Professor Joel Fetzer and 18 students from Pepperdine University, a private research university in Malibu, California.
Their visit was part of the summer courses on East Asian Politics taught by Professor Fetzer, who is an expert in the fields of international migration, ethnic relations, religion, and politics. The students are undertaking different majors but they are all interested in international relations with a special focus on East Asia.

During the meeting, Director General Huang outlined what TECO-LA does and then talked about the history of Taiwan, including Taiwan–US relations, and Taiwan as a democracy. “Taiwan’s democratization started with the abolition of martial law in 1987, and Taiwan has developed into a fully-fledged democracy. In addition, Taiwan is the first country in Asia to legalize same-sex marriage”.

During the Q&A session, Director General Huang was asked to comment on a recent shooting at the Irvine Taiwanese Presbyterian Church in Laguna Woods. He told the students that Taiwan is a multicultural society and democratic country, and no matter where people come from, we should stand together and work for a better common future. Taiwan is ranked as one of the freest countries in Asia and freedom of speech is upheld. And he stressed that people who share different views still have to respect other people.

Brad Shih, Director of the Travel Division and Rebecca Lan, Director of the Education Division, also took part in the meeting. Brad Shih outlined some of Taiwan’s many travel attractions, and Rebecca Lan talked about Taiwan’s higher education system. She invited the students to consider studying or teaching in Taiwan and told them about opportunities to be recruited to work in elementary or secondary schools as English teachers or English language teaching assistants.
Afterwards, the visitors were treated to Boba milk tea, a popular drink in Taiwan, and pineapple cakes, an equally popular traditional dessert, adding some extra special Taiwan flavors to a successful visit. 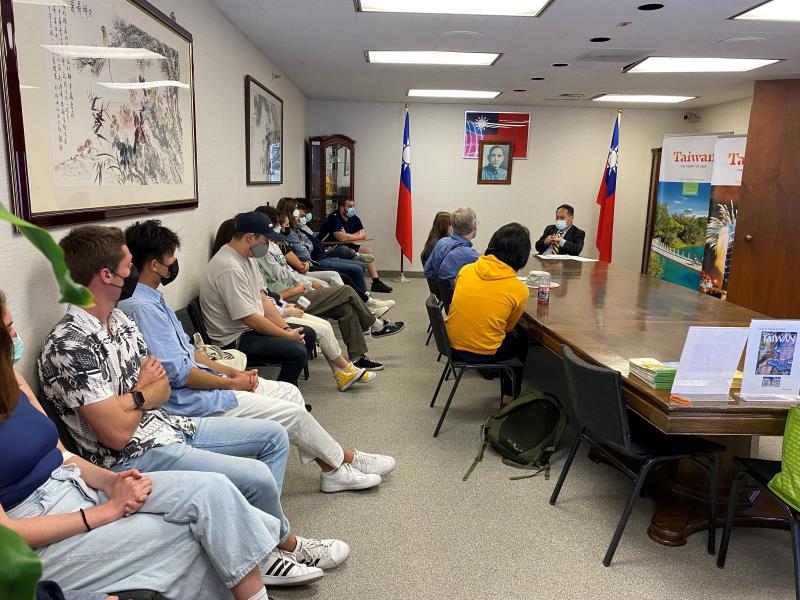