The Ministry of Education Led a Delegation to Visit the Netherlands

font-size：
The visiting delegation, Education Division personnel, and Taiwanese students at three universities in the Netherlands in ECHO building at TUDelft

This visit followed promoting studying in Taiwan at the 32nd Annual EAIE (the European Association for International Education) Conference and Exhibition which was held in Barcelona, and discussing more educational cooperation with the governments and institutions of higher education in Poland and Lithuania.

The Education Division at the Taipei Representative Office in the EU and Belgium arranged a discussion panel with the Taiwanese Student Associations from TUDelft, Leiden University, and Erasmus University Rotterdam at the Technological University of Delft (TUDelft).

TUDelft is one of the Netherlands’ leading universities, listed 57 in the QS world rankings, and 75 in the Times Higher Education World University Rankings. TUDelft is highly renowned for its engineering and technology programs, and this year it was listed for the first time among the top ten in the QS World University Rankings by Subject, further enhancing its international reputation.  The university attracts large numbers of international students. They account for approximately 23.5% of its approximately 27,000 students, and it is one of the universities that most of the students from Taiwan in the Netherlands attend. The number of members of the Taiwanese Student Association at TUDelft (TSA Delft) has been steadily increasing over the last decade, and there are currently more than 100.

Yu Chen Lee, the president of TSA Delft, welcomed the delegation to TUDelft and led the visitors to the ECHO building where the panel discussion was held. The ECHO building is described as “an energy-generating interfaculty building” and as “the most sustainable building at TU Delft, … contributing to the university’s ambitions to operate a fully sustainable campus by 2030.” The delegation was impressed by its design and construction, including energy-saving solar panels, and by the efforts that the Netherlands is making to mitigate the severe environmental impact of climate change.

During the panel discussion with the delegation, Yu Chen Lee gave a presentation using an interactive pop quiz. This was followed by an overview of the sustainable, ecological solutions for energy generation and to counter the effects of climate change that are being produced at TUDelft. There was lively interaction between the delegation and the students in the Q&A session.

The delegation was also interested in hearing about the study and living conditions of these overseas students from Taiwan, as well as their future career plans. The students were very happy to have the opportunity to meet the delegation and to talk with the delegation about their universities and life in the Netherlands. Everyone agreed to help promote future cooperation between universities in Netherlands and those in Taiwan. 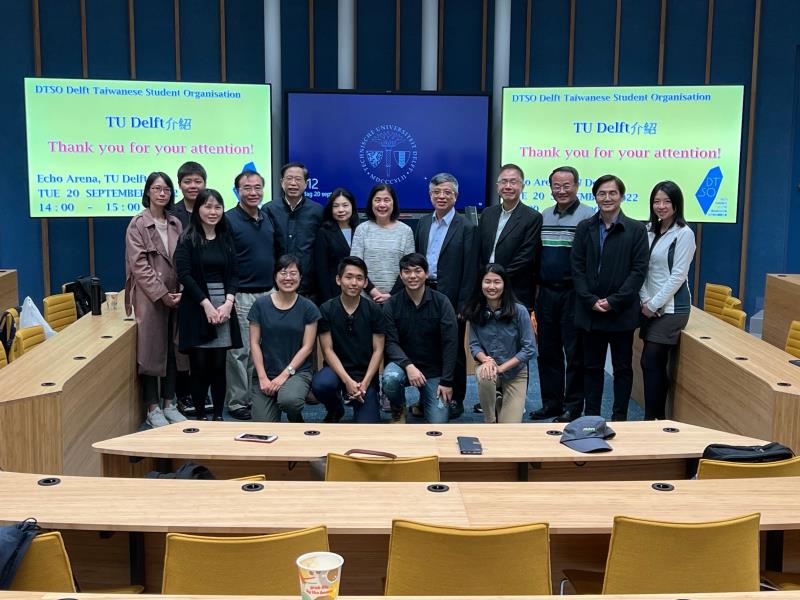 The visiting delegation, Education Division personnel, and Taiwanese students at three universities in the Netherlands in ECHO building at TUDelft 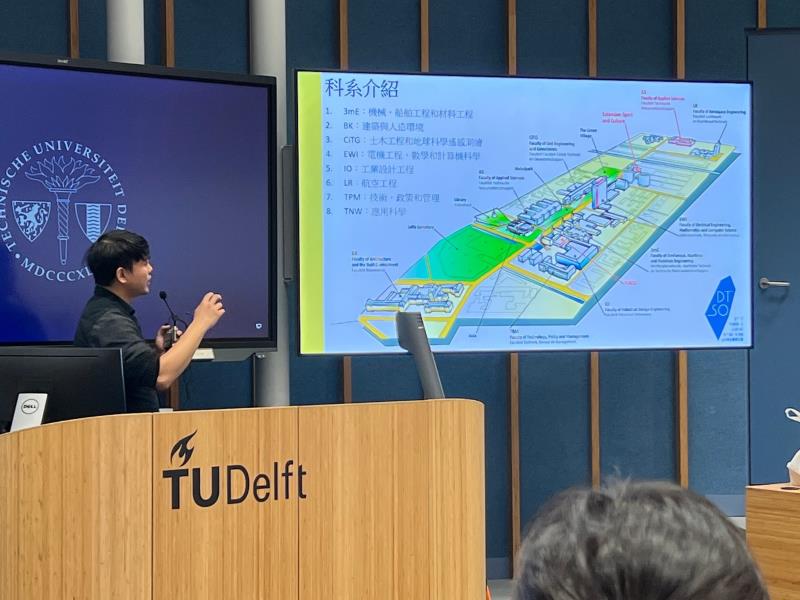 Yu Chen Lee, the president of the TUDelft Taiwan Student Association giving a presentation about TUDelft to the visiting delegation
Top