font-size：
Mr. Thomas Riedler, an Austrian student, just finished his master’s degree in electrical engineering and computer science at Taipei Tech with the support of a Taiwan Scholarship

Thomas Riedler first came to Taiwan as an exchange student in 2018, while he was doing his bachelor’s degree. But even though it took some time for him to get used to the completely different culture, language, and weather, his exchange semester turned out to be a fascinating experience that was immensely formative. The friendliness and helpfulness of people made the great cultural differences start to seem smaller and Taiwan became a vibrant and bustling temporary home for him. Moreover, after encountering many things in Taiwan that in his opinion are better designed than similar things in Europe—such as Taiwan’s public transportation, for example—after a while, his view of “developed central Europe” began to change.

As a result, the exchange semester ended way too fast and saying farewell to Taiwan and all the people he’d met there felt very wrong. So, Thomas decided to search for possibilities to return and stay in Taiwan for a longer period.

He’d heard about the Ministry of Education’s Taiwan Scholarships from another student during his exchange semester, and after he returned to Austria to finish his bachelor’s degree, he applied to the Taipei Economic and Cultural Office in Austria for a Taiwan Scholarship. This would fully fund the two-year international  master’s degree program in electrical engineering and computer science that he wanted to do at Taipei Tech—as National Taipei University Technology is also officially known. It offered international students a great variety of lectures they could attend in the computer science and electrical engineering fields. This program would perfectly complement his bachelor’s degree in mechatronics and six years of related work experience.

Thomas was subsequently awarded a scholarship and accepted by Taipei Tech. He arrived in Taiwan in September 2019, and a highly-respected professor became his advisor. He quickly realized, that the master’s degree program required much more time and effort than his previous exchange semester. Professors often demanded that their students spend every weekday in the lab, except when they had to attend lectures. But he appreciated the opportunity that this gave him to gain deep technical knowledge, and with the help of the friends he made in the lab, he got used to the different style of program. As a result of working exceptionally hard in his chosen courses, Thomas received the award for the best GPA in his department at Taipei Tech in 2020.

After finishing the first two semesters, he spent the following semesters working on a research project in the lab. Multiple technical difficulties occurred so, the research took four semesters, twice as long as planned. But  solving these difficulties taught him a lot, and after three very intense years of studying and hard work, on August 1st 2022, Thomas finally held his master’s degree in his hands.

Thomas stressed that he also enjoyed exploring other parts of Taiwan, especially areas of natural beauty. He’d grown up in the Austrian Alps, so mountains hold a special attraction. He began with the nearby Yangmingshan area just north of Taipei, then went on to explore higher and higher mountains. He soon became friends with people sharing the same enthusiasm for outdoor activities, and they hiked Jade Mountain, the highest in Taiwan, and the pristine Jiaming Lake area. They celebrated reaching the peak of Jade Mountain by enjoying a cup of high mountain Oolong tea.

Thomas expressed his gratitude to all the people who made this very formative experience possible, especially the Ministry of Education, and the Taipei Economic and Cultural Office in Austria that provided his scholarship. He considers that not only has his technical knowledge and expertise grown in these three years, but that he’s become a more open and international thinking person. As a result, Thomas plans to improve his Mandarin at the Mandarin Training Center of National Taiwan Normal University and then look for a job in Taiwan. 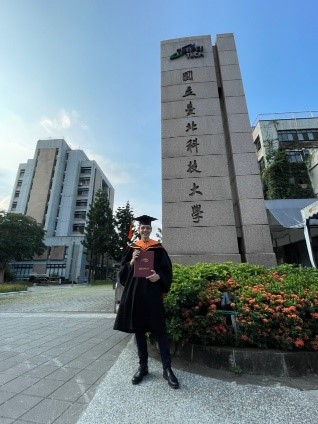 Mr. Thomas Riedler, an Austrian student, just finished his master’s degree in electrical engineering and computer science at Taipei Tech with the support of a Taiwan Scholarship 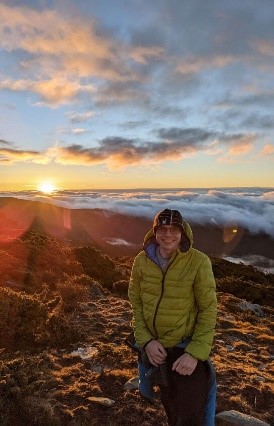 Mr. Thomas Riedler, an Austrian student, just finished his master’s degree in electrical engineering and computer science at Taipei Tech with the support of a Taiwan Scholarship 2
Top