The Education Division of the Taipei Economic and Cultural Representative Office in Japan (TECRO Japan) organized the Taiwan–Japan Education Links Centenary Seminar: Looking Back & Looking Forward, which was held at the Taiwan Cultural Center in Tokyo on August 31.

Dr. Itsuo Sonobe, a former Japanese Supreme Court judge and an alumnus of Taihoku College (now known as National Taiwan Normal University), was the master of ceremonies for the seminar. Seventy people attended, including Mr. Norio Ishizaki, president of Japan’s National Association of Upper Secondary School Principals. Representative Frank Hsieh pointed out in his opening remarks that the history of the education links and exchanges between Taiwan and Japan go back more than 100 years, and the close ties they have with each other have a profound impact. Moreover, in response to the ever-changing world situation, Taiwan and Japan will jointly create new exchange models based on their long-time links.

The Education Division also arranged a centennial Taiwan–Japan education exhibition showing the history of education in Taiwan and of the tight bonds between Taiwan and Japan, and a special demonstration of puppetry given by the Taipei Puppet Theater from Taiwan.

This year also celebrates the 100th anniversary of the founding of a number of prestigious educational institutions in Taiwan—National Taiwan Normal University, National Hsinchu High School, and Taipei Municipal Cheng Kung High School—each of which has trained and educated numerous talented people. Unfortunately, the pandemic made it impossible for the descendants of former Japanese teachers at these institutions to visit Taiwan to participate in the centenary celebrations that were held, so the Representative Office in Japan presented memorabilia to seven such descendants on behalf of the century-old institutions in Taiwan. The recipients included Ms. Naoko Yoshihama, a descendant of Mr. Hanshiro Kawase 河瀨半四郎, the first principal of Taipei Municipal Cheng Kung High School, and Mr. Toshie Oki, a descendant of Mr. Toshie Oki 大木俊九郎, the first principal of National Hsinchu High School.

The Representative Office also presented certificates of appreciation to the all Japan Faculty and Staff Alliance, and to the Japan–Taiwan Youth Exchange Association, to recognize the dedication and long-time contributions to the promotion of Taiwan–Japan education and youth exchanges, made by these two Japanese organizations. For the seminar, four researchers from Japan gave presentations on education exchanges between Taiwan and Japan over the last 100 years: Mr. Isao Kawahara from the Taiwan Association; Mr. Takao Tanii, former principal of Osaka Prefectural Tennoji High School; Dr. Naoya Yamazaki, a professor at Teikyo University; and Dr. Kosei Matsugane, Vice President of National Utsunomiya University. During the panel discussions, the main focus was on future education and youth exchanges. It is expected that the bilateral educational cooperation between Taiwan and Japan will be further enhanced. 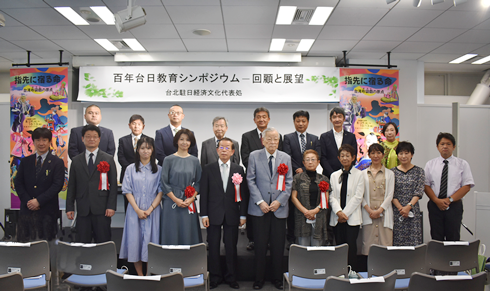