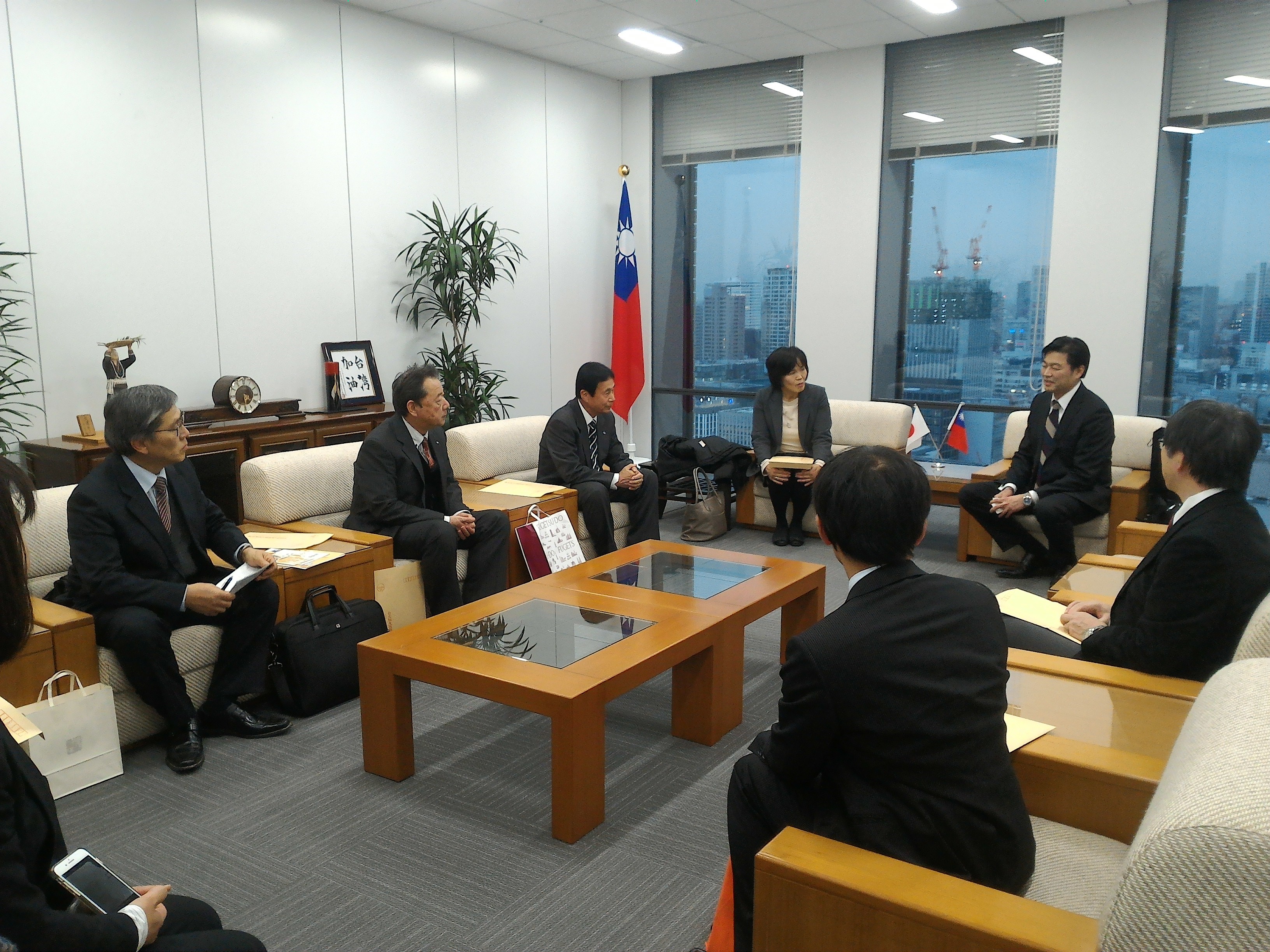 A delegation of eleven—officials from prefectural and county government units in the Kinki region, responsible for helping to organize international study trips and exchanges for students in Osaka, Kyoto, Hyogo, Nara and Wakayama, and Tomoko Yamaguchi from the Osaka Tourism Bureau—visited the Taipei Economic and Culture Office in Osaka for the first time on December 26, 2018. They met with Director Lee to discuss strengthening such educational exchanges between Taiwan and Japan and interaction between the young people of each country, matters that everyone present considers very important.
Director Lee expressed his admiration for and gratitude to each member of the delegation and their respective agencies for working together with the Osaka office for a long time, helping to arrange study visits to each other’s country that have allowed smooth exchanges and senior secondary students in Japan and Taiwan to take place. He welcomed this opportunity to exchange ideas about future directions that might be taken and looks forward to continuing this excellent relationship.
According to a January 28, 2018 Daily News Japan report, the last ten years has seen a 12-fold increase in the number of senior secondary school students in Japan going to Taiwan on a study-related trip, with 41,000 students travelling there last year. In recent years the number going to Taiwan has already exceeded the number going to America, China, or Korea, making Taiwan their No. 1 destination in the world.
During their discussions Director Lee and the delegation members identified the following as some of the reasons behind Taiwan’s being the most popular destination: 1. Taiwan has a close affinity with Japan; 2. Low travel costs; 3. Good law and order; 4. Convenient and regular flight access; 5. Excellent food; and 6. Senior secondary school students in Taiwan have a similar English ability to their counterparts in Japan, and so it’s much easier for them to communicate with each other.
Given that Taiwan leaves many good impressions on those who visit and go there on exchanges and word-of-mouth reports then act as a natural form of marketing, it’s expected that the number of people going to Taiwan on study visits will inevitably continue to increase. This in turn will be greatly conducive to expanding educational exchanges between Taiwan and Japan, and interactions between their young people.

Photo:Lee Shyh-Bing, Director of the Taipei Economic and Cultural Office in Osaka speaking with officials from the departments of two prefectures and three counties in the Kinki region responsible for assisting educational exchanges and visits.