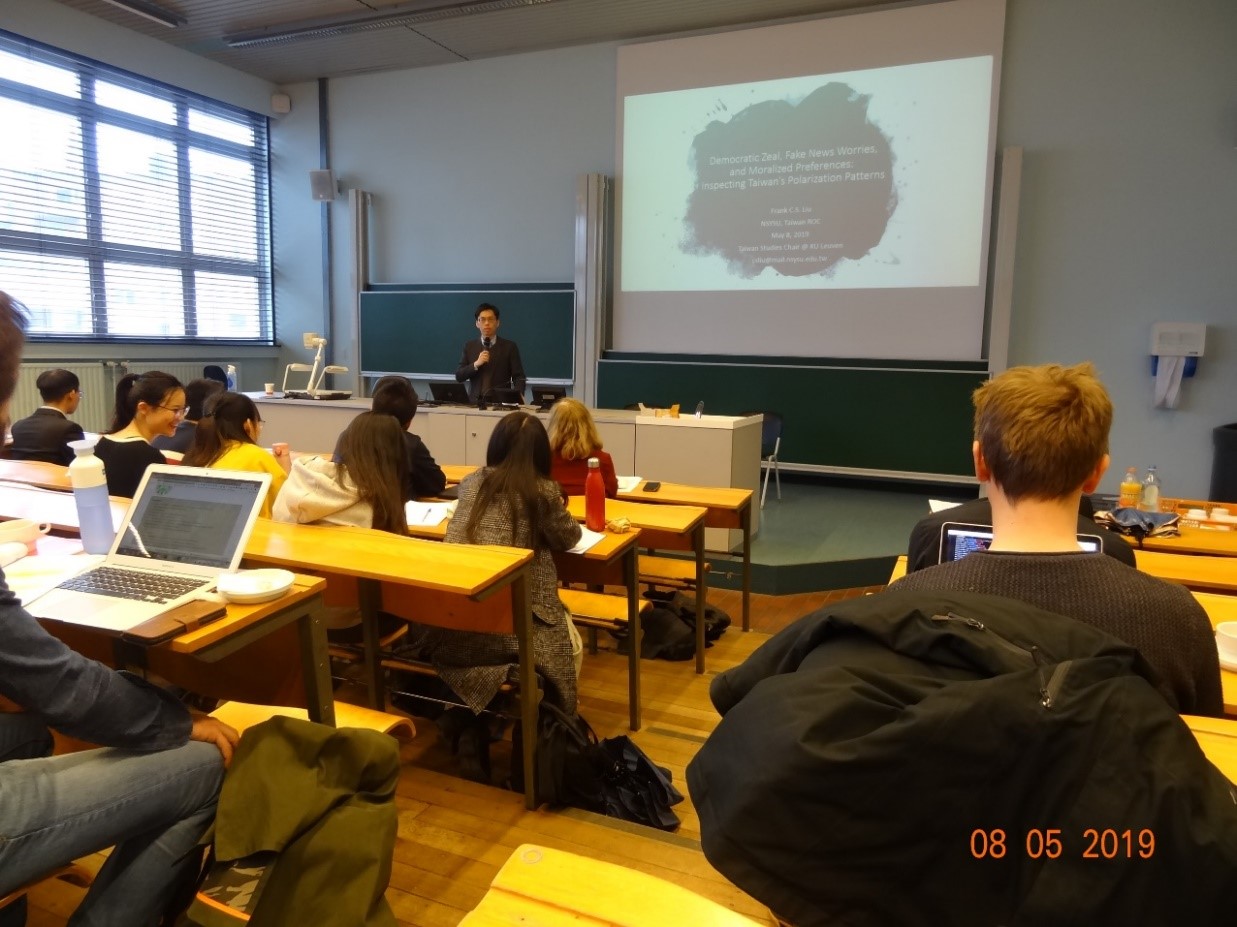 A Taiwan Studies Programme seminar sponsored by KU Leuven’s Faculty of Social Sciences and Taiwan’s Ministry of Education was held at the Faculty of Social Sciences of the Catholic University of Leuven (KU Leuven) on May 8.  The seminar, entitled Regional Reflections on the Shape of Democracy, News Performance and Citizen Engagement, was organized by Prof. Frank Liu from the Institute of Political Science at National Sun Yat-sen University, the current holder of the Taiwan Studies Chair at KU Leuven, and hosted by Prof. Leen d’Haenens from the Institute of Media Studies at KU Leuven.

The first part of the seminar gave the participants a wide-ranging picture of the media landscape in Taiwan and how the media there is used and perceived. It began with a presentation by Prof. Frank Liu on Democratic Zeal, Fake News Worries and Moralized Preferences: Inspecting Taiwan’s Polarization Patterns 2018–2019. Prof. Lut Lams from the Institute of Journalism Studies at KU Leuven Brussels then spoke about the media ecology and performance in Taiwan. He was followed by Prof. Dachi Liao, also from the Institute of Political Science at National Sun Yat-sen University, who spoke about connective populism created online. He illustrated his analysis with the example of the Mayor of Kaohsiung City, who according to The Star Online won the election in 2018 because “voters fell in love with his daughter Coco on social media”.

In the second half of the seminar, Prof. Vibodh Parthasarathi from Jamia Millia University in New Delhi spoke about India’s news media infrastructures; Prof. Michaël Opgenhaffen from the Institute of Media Studies at KU Leuven Antwerp spoke about Flanders’ experiences with fake news; and Prof. Pascal Verhoest, Professor of Political Economy and Communication at the Free University of Brussels, gave a presentation on how the human brain perceives news and the values it associates news items with. The seminar was followed by a reception where the participants could further discuss the many ideas and views presented.

This Taiwan Studies Programme at KU Leuven was set up in 2016 after Taiwan’s Ministry of Education signed an agreement with the university to co-sponsor visiting scholars from Taiwan to fill a Taiwan Studies Chair at KU Leuven, each for a term of two years. Prof. Yang Che-ming from National Cheng Kung University was the first visiting scholar to fill this position. Prof. Yang introduced Belgian and international scholars to the role and liturgy of Buddhism.

Prof. Frank Liu, the current visiting scholar, is from National Sun Yat-sen University which already has close ties with the Faculty of Social Sciences at KU Leuvens. National Sun Yat-sen University co-organized and then hosted the 2018 International Conference on E-Society Research. The two universities hope that this will be the first of many collaborations and hope to set up an E-Society community to share research approaches and results.