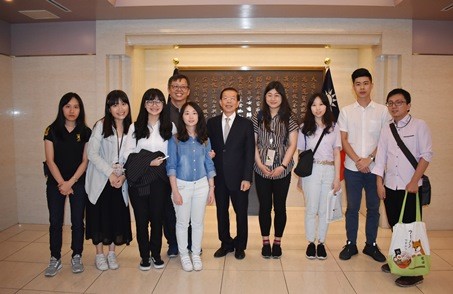 Thirty-one students from the Department of Political Science at Soochow University accompanied by four teachers, including Associate Professor Wang Huei-Huang (王輝煌), visited Japan from May 26 to 31 to participate in an overseas learning program in Tokyo. On May 27, the students visited the Taipei Economic and Cultural Representative Office (TECRO) in Japan to learn more about its functions and the services it provides, as well as the diplomatic relations between Taiwan and Japan.

The students were received by Representative Frank Hsieh (謝長廷) who welcomed them warmly and engaged in a lot of conversation with them. They asked him many Political Science related questions, including "What impact has Japan’s political system had on its policy-making?", "What is the nature of how relations between Taiwan and Japan are handled within the Representative’s Office?", "How did Japanese society react to Taiwan’s referendum vote to ban imports of products and food from areas affected by the Fukushima nuclear disaster?”, "What does the Representative think about Japan's drift away from Confucian culture?", and "What does TECRO think about the severe effects of some fake news reports?"

In his replies, Frank Hsieh pointed out that Japan has adopted a parliamentary system, and most of the Cabinet ministers are senior members of the National Diet, of which all members are elected. The ministers are very familiar with the policies being considered, and so policy decisions can be made smoothly. Regarding relations between Taiwan and Japan have gone through various stages. Breakthroughs have been made in many areas, and both official and non-governmental ties established, particularly after the 2011 Tohoku earthquake hit Japan and Taiwan offered assistance.

During his term of office, he promoted the renaming of the Association of East Asian Relations, Taiwan’s agency that handles its formal relations with Japan as the “Taiwan–Japan Relations Association” (台灣日本關係協會), and Japan decided to change the name of its representative office in Taiwan to the "Japan–Taiwan Exchange Association” (日本臺灣交流協會). These changes both occurred in 2017, and the local governments of Taiwan and Japan have signed 128 bilateral, regional friendship agreements.

In response to the so-called “nuclear food” referendum, he explained that the Japanese government recommends basing food import and export restrictions on scientific findings, rather than on the results of a referendum.

And as for Japan's attitude towards traditional Confucian culture, Japan combines extracting the essence of its time-honored Confucian culture, with advocating the continuous study of the ideas and technologies of advanced Western countries, incorporating Japan's unique cultural influence. Lastly, he commented that the emergence of fake news has surged to record levels and has had many negative impacts on people, so all governments need to increase their ability to judge the authenticity of messages prudently and quickly verify the details.

The Representative ended a very informative visit by encouraging the students to pursue their dreams and wishing them a bright future.