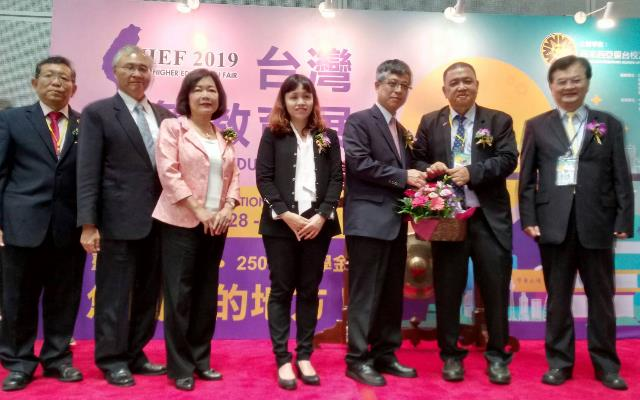 From April 8 to May 3, more than 27,000 people visited the Taiwan Higher Education Fair exhibitions that were held in six major cities in both east and west Malaysia: Kuala Lumpur, Klang, Ipoh, Kluang, Kuching and Kota Kinabalu.

To promote the excellent learning environment in Taiwan, the Political Deputy Minister of Education, Dr. Mon-Chi Lio, and representatives from leading universities in Taiwan took part in the 13th Taiwan Higher Education Fair on April 28, at the Kuala Lumpur Convention Centre.

The exhibitions were hosted by the Federation of Alumni Associations of Taiwan Universities, Malaysia (FAATUM) in conjunction with the Ministry of Education of the Republic of China (Taiwan), the Overseas Community Affairs Council of the Republic of China (Taiwan), and the Taipei Economic and Cultural Office in Malaysia. This year, 73 universities – including 30 technology universities – set up a booth at each exhibition.

Dr. Lio spoke at the opening ceremony of the education fair in Kuala Lumpur and encouraged Malaysian students to study in Taiwan, mentioning that 16,717 Malaysian students were doing so last year. He gave several examples that illustrate that Taiwan’s higher education sector is playing a vital part as one of Malaysia’s education partners. Such educational interaction with its neighboring countries is a central feature of Taiwan’s New Southbound Policy. Last year the Ministry of Education provided 35 Taiwan Scholarships to Malaysian students to study for a degree in Taiwan. Perhaps they will emulate the two Malaysians who were among the winners of last year’s inaugural Distinguished Alumni Awards, for their outstanding achievements and contribution after graduating from the university they attended in Taiwan.

Three Malaysian university lecturers are currently undertaking a master’s degree or a doctorate program under the Elite Scholarship Program. It is hoped that they will actively promote academic communication between Malaysia and Taiwan in their particular fields after they return to Malaysia.

As well as offering scholarships, the Ministry of Education also organizes occasions such as the Malaysian Enterprise Recruitment Fair held in Taipei last year, to assist Malaysian graduates seek out opportunities to work in Taiwan and help meet the local labor market demand for skilled people.

While in Malaysia, Dr. Lio also visited Prof. Ir. Dr. Mohd. Hamdi Abd. Shukor, the vice-chancellor of the National University of Malaysia (UKM) at the university. He invited Prof. Hamdi to attend the 2nd Taiwan–Malaysia University Presidents’ Forum which will be held next year, to promote further educational cooperation and exchanges between Malaysia and Taiwan.